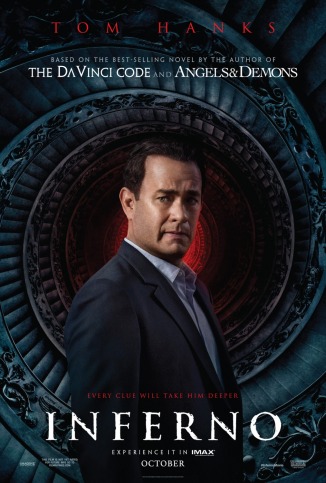 Directed by Ron Howard, starring Tom Hanks, Felicity Jones, Omar Sy, Ben Foster, Sidse Babett Knudsen and Irrfan Khan. Robert Langdon has no memory of the previous 24 hours, and yet somehow he is involved in a plot to kill half the human population in order to save it from the inevitable problem of overpopulation, oh and someone is trying to kill him.

I’ve been a fan of Dan Brown’s work since first reading The Da Vinci Code, reading each book in the Robert Langdon series and those standalone books such as Digital Fortress and Deception Point. For those who are unaware of Robert Langdon, he is an American professor at Harvard university where he teaches Religious Iconography and Symbology. He is continually called upon by various government figures to solve cases that are set in a number of European countries.

As a subject matter, I find his work in symbology interesting and when exploring this through the backdrop of fantastic cultural cities such as Paris, Florence, and the Vatican, you really can get easily lost in most of Dan Brown’s books. I do recognise that these books are ‘at times’ convoluted and invetitbaly reach a conclusion with very little evidence and are more speculation than fact, they are fun to read though. Sadly Inferno forgets the fun at times and replaces it with some very convoluted plot and some really quite dull action scenes.

This is the third collaboration between director Ron Howard and Tom Hanks in the Robert Langdon series, one they were clearly too comfortable with making. The premise of ‘Inferno’, which at times feels as though you’re being repeatedly hit over the head with quite a simple idea. Ben Foster’s character, ‘Bertrand Zobrist’ believes that owing to the world’s growing overpopulation problem, we need to take charge and decide whether to ‘flip the switch’ and kill half the population, or wait until the inevitable problem of overpopulation affects us all and causes mass suffering. Zobrist, inspired by the poet Dante Alighieri, creates a biohazard weapon which will help him achieve his aim with immediate effect in the form of a plague, rather than waiting for overpopulation to cause human suffering.

As a film, ‘Inferno’ has both its strengths and its weaknesses. It is a good adaptation of the novel, though it’s been a while since I read the book, the film continually jogged my memory in a reassuring manner. There is a certain formula present throughout the film, intellectual stimulation, action pieces and repeat. This formula is why I think Ron Howard has become far too comfortable directing these films, you can almost predict what is about to happen if you are conscious of the time. Now, as I say, I have not read ‘Inferno’ in some time, so I cannot remember whether this film is totally loyal to the novel, but certain action sequences feel as though they been exaggerated for the purpose of a Hollywood Blockbuster film. I’m referring to scenes such as one involving a particular scene involving Tom Hanks and Felicity Jones as they are chased by a inconsistantly speedy drone, it feels out of place, and a little silly to be honest, but fits with other action scenes that are also misplaced.

The strength of this film relies on Tom Hanks, Felicity Jones and Ben Foster, all of whom are charismatic and of course engaging enough to make this film as good as it could be. Ben Foster is a very underrated actor who certainly deserves more critical acclaim, than he currently recieves, or perhaps he needs to make better choices.

All three characters explore the intellectual components of the film, from Dante’s powerful vision of hell which has become the most famous and iconic depiction to date. To the more common perceptions of a plague’s long term effect on humanity, including a few theories I was unaware of. I do wish the historical elements of this film had been given more attention over the government espionage theme that, although present in the books, seemed to drag for a tad longer than perhaps really necessary.

OVERALL ** The same formula as the previous adaptions, but slightly less fun and one that certainly drags in parts. The power of Tom Hanks and Felicity Jones’ charisma, mixed with a portion of interesting history allows for parts of this convoluted film to be interesting.

RECOMMENDATION – I would give this one a miss and go and actually read Dante’s Divine Comedy.