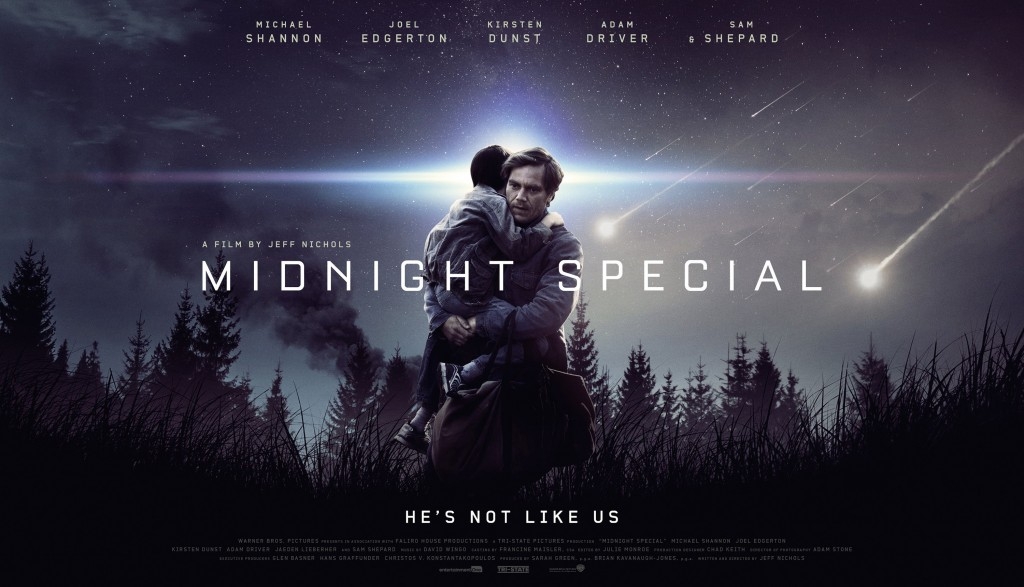 Directed and written by Jess Nichols, starring Michael Shannon, Joel Edgerton, Kirsten Dunst, Adam Driver, Jaeden Lieberher and Paul Sparks. A father who is on the run with his son, who possess special abilities, are fleeing from both the government and a religious cult.

Films such as these tend to spend over 30 minutes to an hour overly explaining the concepts, the organisations and character backgrounds. They spend a great deal of time watching the boy’s powers develop as he grows older, setting in motion a plan of escape, or establishing the ideology of the religious cult. For some films, this is necessary as either the script is not strong enough to provide clear points of information to the audience, or the narrative is so overly complicated it is a necessity to do so. Midnight Special skips the first and second act and begins oddly in the third, straight into the heart of the film. Achieving this with a very intelligent and successful balance of science fiction and character narrative. The narrative throughout the film is still able to inform the audience clearly who each character is and why the cult and government are both after the child without over complicating it. Already I have the strong desire to re-watch for any subtleties I missed on my first viewing.

This is a many-layered story with incredible acting, particularly from Kirsten Dunst and Adam Driver, whose emotionally charged journies are beautifully portrayed by the actors. This is a father son story, a mother son journey, a family exploration into the love of their child, and ultimately an exploration into the unknown without ever over complicating its components.

What really stands out, besides the breathtaking visuals and powerful cinematography, is the script. While other films feel the need to create moments of dialogue between characters in order to convey backstories or information for the audience, this often this feels out of place or forced. Midnight Special creates these moments in very natural ordinary ways, without over complicating anything. By writing dialoge in such a way it provides a realism that the characters are investigating each other for their own purposes rather than for the benefit of the audience. Yes, it would be marvellous to discover more information, but for the purpose of this film, the balance of narrative and cinematic experience is spot on.

You would be forgiven for thinking this to be a J.J. Abrams films, there are clear stylistic and narrative comparisons, with the clearest influence to ‘Super 8’;however, I found this film to be far superior in its ablity to engage myself and its emotionally powerful narrative, this always makes for a compelling science fiction film. Nicholas has successfully directed and written a story about family survival in a science fiction genre. I’m not sure why this is hasn’t been given more critical acclaim, or social awarness, I do not believe anyone I know who equally enjoys films to the same level as myself has mentioned this film before which is a shame. Or perhaps it is just me who has let this film slip by without any recognition until now.

**** An example of the wonders of filmmaking, science fiction and intelligent narrative structure. Emotionally powerful and a far superior film than a great number of recent science fiction films.

RECOMMENDATION- I cannot understand why this is not more well known, I highly highly recommend it.