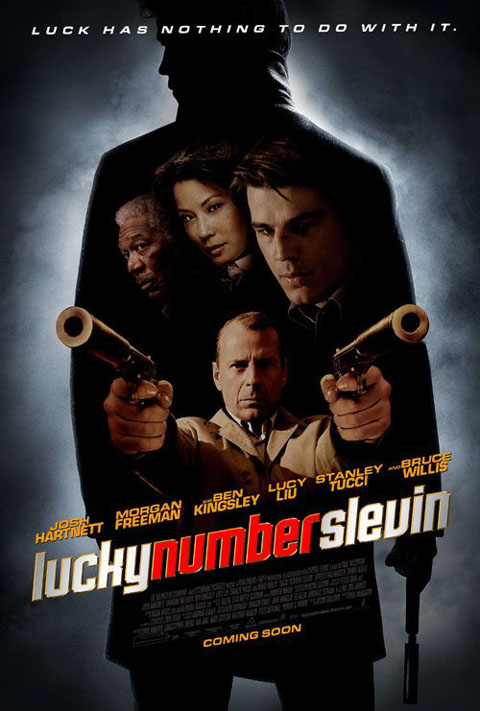 The film is centered around the man called Slevin who is a man in the wrong place at the wrong time. He has just flown into the state and is staying at his friend’s house when he is picked up by two gangsters and is placed between two of the cities biggest mob bosses. The Rabbi and The Boss.

As Always I like to go into more depth with my reviews, however I do not see how I can do this without revealing some huge spoilers which would simply ruin watching the film first time. So I shall say this, the film was unexpectedly brilliant clever and I would say go and see it if you have not already.

SPOILERS!!!  you have been warned.

Now on to the more in-depth review, I am very surprised  that this film did not get more attention when it was first released. It’s fast clever and gripping and is one of those films that you need to watch twice.

The start of the film is fuelled by a seemingly obscure story about a race horse that dies, then the story moves to our main character Slevin played by Josh Hartnett who I must say does an excellent job in this film. Once the gangsters have spoken about the plan, its gets exciting and peaks our already interested minds. The words and items they use are very subtly shown in shots, say of Morgan Freeman’s ring, making you think it’s just part of the scene not realising that camera movements like this are crucial in explaining the whole weird scenario. Indeed  The Rabbi, played by Sir Ben Kingsley, who does a good new Jersey accent realises that this is not the man they are after yet his hired assassin knows it too. This seemingly unfortunate individual is supposedly being placed in a difficult spot as he is ordered to kill one of the gang leaders son.  We feel for this man, he is taking it to very well to be given with such a task.

For me the first clue that this man may not actually be who he appears to be is when he kills the Fairy. He kills him with a steady hand and seems unflustered by what he has done. Enter Bruce Willis and nothing changes, clearly the two men know each other, some thing is afoot.

Of course at the end everything is revealed and the some what random story at the beginning is not random but is in fact the fuel for the whole film. It’s clever and like Sixth Sense makes you want to watch it again to see how things really were.

The star performance from this film has to go to Josh Hartnett , he is brilliant to watch in this, he is funny and you feel sorry for him and yet laugh when you find out the truth.

**** It’s not what I expected but was simply better than I thought, people should watch this film if they have not already and if you have then watch it again.